“The deprived community of Anacostia came to be, not by choice but by chance and through a woeful lack of vision.” 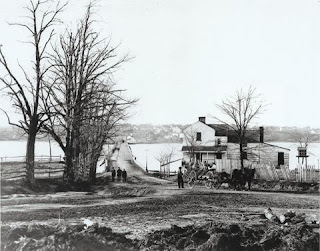 Anacostia, known as Uniontown in the 1850s, was once home to an all-white workforce from the nearby Navy Yard across the Anacostia River. A stone’s throw away was the Barry Farms area where the descendants of slaves and freed Blacks lived. As the 1880s wore on, the blacks began moving into Uniontown. The home of abolitionist Frederick Douglass on the panoramic Cedar Hill is a National Historic Site managed by the U.S. National Park Service and a the largest tourist attraction in the area. By the turn of the century, the city began to expand into the Anacostia area. Even the federal government moved in, developing an airfield on a tract of land that spanned several miles along the shoreline. This installation would eventually be named Bolling Air Force Base, Anacostia Naval Air Station and the Naval Research Lab.

In the early 1900s, Anacostia’s economic wellbeing was hitched to a hub of barber shops, small drug, grocery and hardware stores, and family-owned furniture shops.

WW II brought in dramatic change to Anacostia. The population doubled as new neighborhoods in the far southeast region were developed. The wartime growth in the military bases spurred demand for housing, with thousands of two-level apartment buildings established.

In the years leading up to the 1960s, Anacostia was a thriving, vibrant community with quaint and dignified suburbs in the outskirts of Washington DC, with predominantly white people, good schools, plenty of parkland and clean air. With the gradual development of the outlying areas of Washington DC in the 1950s and the 1960s, longtime white residents moved out of Anacostia, and waves of blacks began to move in. Many of the small shops put up shutters or followed their longtime customers to the suburbs.

The influx of new residents occurred along with the shutting down of the wartime industry such as the military armament factory in Congress Heights. These combined effects triggered the economic and population decline of the southeast.

As I read on, I realized that the deprived community of Anacostia came to be, not by choice but by chance and through a woeful lack of vision. As the once wealthy neighborhood began to collapse, day by day, the affluence was getting replaced by stark disrepair. The city leaders of the 1960s lacked the vision and foresight to realize the negative consequences of what they did in order to make space for revitalization of the southwest neighborhood across the river. Supported by the federal government, they literally dumped the poor and under-privileged across the river to the newly-built but congested tenements that were sprouting like mushrooms around every corner.

Before long, the city fathers realized the gravity of their error, but it was too late in the day to retrace their steps. The shift in populace and the new bussing regulations that swept the nation, led to white people leaving Anacostia in droves. Following close on their heels were the middle class blacks who couldn’t stand how bad the streets had gotten and how unsafe the schools had become. The neighborhood was almost unrecognizable after some time. The safe and trusty Mom and Pop stores and the family barbershops gave way to vandalized houses, vacant lots and liquor stores.

Over thirty years, the upscale neighborhood fell from its middle-class perch to a poverty-ridden, crime-infested community where the common sights were check-cashing outlets, liquor stores, drugs, crime, homeless people, storefront churches and abandoned buildings. When Interstate 295 came into being in the 1960s, there was fervent hope that might bring a change for the better. Hopes were miserably dashed when all the beltway did was to give Anacostia a sense of being little more than a shortcut from the suburbs to downtown.

By the beginning of the 21st century, nearly one in six housing units were vacant and more than one in three residents were living in poverty. 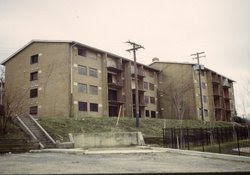 Only residents know the miserable reality of life in Anacostia. Crime is a part of daily life, with one-fourth of the city’s murders committed in the area, according to police statistics for the Seventh District. Anacostia and Ballou, the High Schools of the area are among the District’s most troubled. In 1990, the only grocery store in Anacostia closed down. There are no sit-down restaurants in the entire Ward – just a sea of carry-outs that pass food to customers through bullet-proof glass. The Players Club on Martin Luther King Street, the only place that serves a decent lunch, has albeit, a Jekyll-and-Hyde façade.
View Larger Map

The Players Lounge
During the day, you may run into the mayor for lunch or encounter a local or aspiring politician.  By night, the lounge transforms  into a sleazy, sordid strip club where people get mugged or stabbed perennially every night. The formerly famous and classy Nichols Avenue (Dr. Nichols was formerly the superintendent of St. Elizabeth’s Hospital) is now the infamous Martin Luther King Avenue, where open air drug markets, drive-by shootings and gang wars play out in squalid surroundings. Teenage boys regularly terrorize the town by stealing cars, burning them up and leaving the burned carcass on cinder blocks on the wayside. Makes no sense. These acts were merely for the fun of it.  Crime was coming back in a big way. Crack or cocaine use is rampant on Galveston Place and Mellon Street and residents who brave the menacing behavior and threats in the light of day, are too scared to do the same at night, even though securely locked up in their cars. Fear is all-pervasive, and even the police delay answering distress calls, often waiting an hour or more to respond. The state of the main thoroughfare of Anacostia seems no different to the vandalism and waste of war-torn, terror-swamped Beirut or Baghdad after a terrorist strike.
View Larger Map
When the weekend came around, I was sufficiently acquainted with the history of Anacostia for my first visit there to be meaningful. As I drove my truck down from Arlington, the dismal weather added to my somber mood in no mean way. The twelve inches of thick, wet snow dumped by the huge snow storm of the previous week was gone. What was left behind was a muddy quagmire of rocks, sand and mud and a bone-chilling, blustery wind that blew steadily from the east. I passed the Barry Farms, the last vestige of public housing in DC. My truck rattled crazily on the cracked and rutty road which was in an absolute state of neglect and disrepair like the dilapidated, pathetic-looking puke-brown houses at Barry Farms. Rough-looking, unkempt; youth hung around the street indolently, while the children of the area played around them, shrieking and yelling as they ran hither and thither amidst crack needles and used condoms, innocently oblivious to the more sinister goings on around them. Every which way I turned, hopelessness stared me in the face and my heart kept sinking with every mile, even as the laundry hanging on makeshift clothes lines whipped about crazily in the cold blowing, as if desperately trying to lure me there. The feeling of abandonment, of overhanging danger, was so intense I began to wish I was in an armored humvee with ballistic glass, instead of in my simple Ford Ranger pickup truck.
View Larger Map
As I steered my truck down Martin Luther King Boulevard, the atmosphere turned tangibly formidable. The solitariness that seemed to pervade the area was enhanced by the silence that enveloped the red-brick walled campuses of the old mental asylum of St Elizabeths, which flanked both sides of the road. I had no idea where I would end up—perhaps this was a war zone …. With a deep sense of uncertainty I headed north on Alabama Avenue. 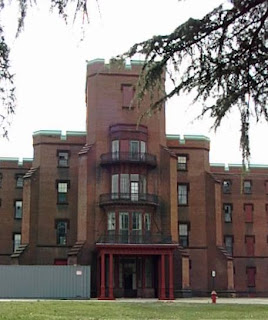 And then serendipity walked into my life. What a wonderful feeling of old-world charm, of warmth, courtesy and dignity flowed through my being! Not in my wildest dreams had I expected this kind of genteel neighborhood in such squalid, miserable surroundings. Leafless burly oak trees, like faithful sentinels, lined the street, their gigantic trunks offering security and stability to the ornate Victorian houses that stood beyond, gracious, spacious buildings, most of them orderly and well-kept. 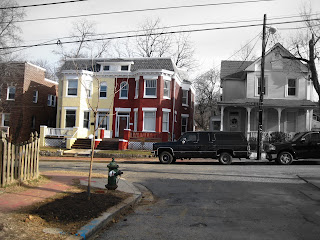 As I cruised by, bemused, enthralled, the years rolled back to an era of wine and roses in Anacostia. I imagined an environment of upper class living that matched the graciousness of their homes. A well-maintained playground and a softball field would have been favorite haunts of the children of the area as they ran and played with abandon, singing at the tops of their voices, the air filled with high-pitched laughter and joyous screams. The ting-a-ling-ling of the ice-cream truck on a hot summer day would have brought the kids out by the dozen, thirsting for ice-lollies and varied flavors of ice-cream.

Schools that were clean and well-maintained where the children of affluent white Americans in days gone by were given the foundation for their lives. As I drove past, I could not help the let-down feeling that engulfed me as I observed the leaky roofs, the sense of dilapidation and neglect that seemed all-pervading. The neglect outside was just a whiff of the unkempt condition that could probably be found inside, I said to myself.

With an emphasis on typography, white space, and mobile-optimized design, your website will look absolutely breathtaking.

Our team will teach you the art of writing audience-focused content that will help you achieve the success you truly deserve.

We help creative entrepreneurs build their digital business by focusing on three key elements of a successful online platform.